Tips for Betting on Golf Majors in 2019 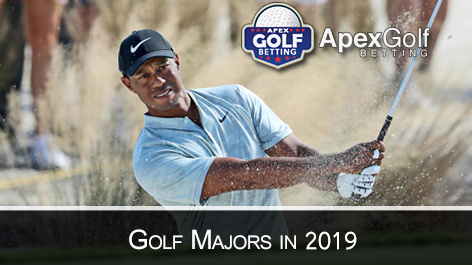 We’re at the point in the PGA Tour schedule where it’s time to start looking at who could win golf’s four major tournaments in 2019. We’re only a week away before the US Masters, which is the most prestigious golf tournament in the world.

Here’s when each of the four golf majors will be played in 2019:

PGA betting sites already have futures odds for each of the four majors. You can already bet on who will win The Open in July. The most popular way to bet on golf’s majors is by wagering on which golfer will win the tournament, but there are lots more ways to bet.

Golf betting has been growing in popularity and all PGA tournaments will have most of the bet types we discuss in this guide, but one thing special about the four majors is there are always dozens of prop bets that you won’t find posted for other tourneys.

To give you an example of how crazy the exotic props can get for the majors, last year you could bet on whether or not the winner of the Masters would cry on the 18th green.

There will be hundreds of futures and props to bet on for each major, but don’t forget to look at the matchup markets. Bookies will put two or three golfers in a group and you can bet on which golfer will finish with the best score throughout the tournament. Matchup markets are also available for a single round of a PGA tournament.

Learn about on how to bet on Golf – Match-Ups, Props, and odds to win

Betting on the 2019 US Masters

While the props are fun to bet on, the real money is made in the matchup and futures markets at the US Masters. One thing to keep in mind is that the Masters is played at Augusta every year, so course form comes into play in the first PGA major of 2019.

Betting on the 2019 PGA Championship

Typically the PGA Championship was the final major of the year, but for 2019 the tourney has been moved up to May. I’m not sure how that’s going to affect the golfers. This will also be the first time this major has been played at Bethpage, although the US Open was played on the black course at Bethpage in 2002 and 2009.

Brooks Koepka has won the last two US Open majors. Can he 3-peat? He would become the first golfer to 3-peat since Willie Anderson won in 1903, 1904 and 1905. The courses chosen for the US Open often benefit the golfers leading in driving distance.

Betting on the 2019 Open Championship

The Open Championship is returning to Northern Ireland for the first time since 1951. This major is played on links courses, so it’s always important to make sure your selections are experienced on the links. The weather often becomes an obstacle at the Open as well.

Golf betting and the Picking the Right Sportsbook

Woods hasn’t been in great form this season, but McIlroy has been playing amazing golf and he could take down a major in 2019. McIlroy has finishes of T5, T4, T2, T6 and 1st in the five tournaments he has played in 2019. He just won the Players Championship in March.